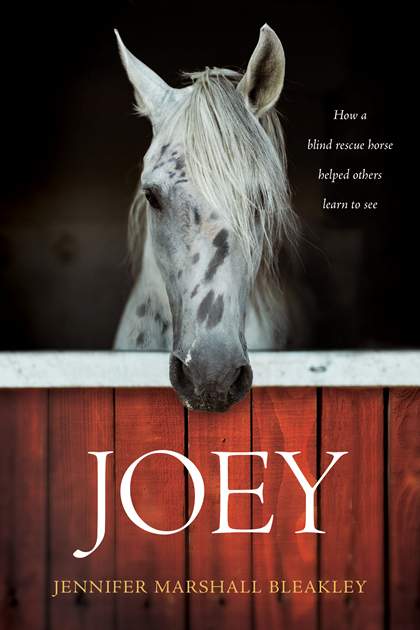 This is a heartwarming true story about Joey, a blind Appaloosa that lived at Hope Reins and inspired everyone who knew him. Jennifer Bleakley, a Hope Reins volunteer and aspiring author, fell in love with Joey and his courageous journey from darkness to light.

The heartwarming true story of a blind horse named Joey.

At the height of his show career, this beautiful Appaloosa’s majestic stature, strength, and willingness to work made him the perfect partner. But when an injury cost Joey his show career, he moved from one owner to the next, ultimately experiencing severe abuse and neglect. A rescue group found Joey nearly dead from starvation―and blind.

Then he came to Hope Reins―a ranch dedicated to helping hurting kids who had been abused, emotionally wounded, or unwanted. By teaching these children to care for rescued animals, the Hope Reins staff were convinced they could reach kids with love and hope and show them that we are never forgotten by God.

But could the financially struggling ranch afford to take care of a blind horse that no one else wanted? Could Joey somehow learn to trust people even though the world had hurt him so badly? And what would happen―to Joey, the kids, and Hope Reins―if they failed?

A true story of friendship destined to become a classic, Joey will touch your heart and reveal the power of finding light in the darkness.

Jennifer Bleakley’s love of the written word began with a coffee pot. As a shy young girl, she found it hard to verbally communicate what was in her heart. Her perceptive father began writing notes to her and leaving them in front of the coffee pot for her to find in the morning. Jen took great delight in replying to her dad—leaving her own notes for him to find. Thus beginning their “coffee pot chronicles,” and Jen’s lifelong love of the written word.

Jen holds a master’s degree in mental health counseling, and worked for several years as a grief counselor before relocating to NC with her husband and staying home with their two children.

With her career plans on hold, and while living in a sea of dirty laundry, Cheerios and apple juice stains, Jen found comfort in journaling—recording evidences of God’s hand, still at work, even in the midst of the mundane. Her journaling morphed into a blog, where she still writes regularly about glimpsing God’s grace in our daily lives.

Jen is a contributing author for Treasuring Christ Curriculum and She Believes Online Bible studies, and she writes curriculum and devotionals for her local church in Raleigh, NC. And even though she once swore she was too introverted to speak from a stage, she has found that God’s grace is big enough to allow her to do just that, and now delights in speaking about His extraordinary grace.

When Jen is not typing away on her beaten-up computer, you can find her hanging out with her handsome software engineer/wood-working husband and two rapidly growing children, chasing after their very needy Golden Retriever, or sitting in carline. If you can’t find her there, she is most likely buried under a pile of laundry daydreaming of the beach.

Joey needed a second chance.
The ranch needed a miracle.

With her fledgling horse ranch, Hope Reins, in dire financial trouble, the last thing Kim Tschirret needed was one more problem. But when she met Joey, a former prizewinning jumper who had been abandoned, neglected, and malnourished to the point of blindness, she saw in him the same God-given potential she saw in every abused and abandoned child her ministry was created to serve.

So, despite the challenges that would come with caring for a blind and wounded horse, Kim took a leap of faith and brought Joey home to Hope Reins.

But as Joey struggled to adapt to his new surroundings, trainers, and pasture-mate, the staff’s confidence began to falter. Could Joey learn to trust again―to connect with the children who needed him so badly? What if they couldn’t take care of Joey? And how much longer could they afford to try?

A heartwarming story of loyalty, friendship, and healing, Joey is a profound testament to the power of blind faith.

“Yes, I’m calling from the Nash farm off US 60. There are several badly emaciated horses out in the field, and some of them appear to be dead.”

“Okay, ma’am, someone from the sheriff’s department and animal control will be there shortly.”

Penny tucked her phone into her pocket and headed toward the stables. “Please, God, don’t let there be any more like these in there.”

All of the stalls were empty. Then, just as she was about to leave, she saw a hoof sticking out from behind the end stall.

She dropped to her knees, mud and manure seeping into her jeans. Her heart caught in her throat. She recognized the familiar short blond tail, the white-and-black polka-dotted coat hidden beneath the crusted-on mud and filth.

The silence was broken by the sound of the front gate slamming shut. The authorities had arrived.

As she stood shivering in the rain while answering the sheriff’s questions, a shout pierced the melancholy air. “Hey! This one is still alive!”

Penny dashed back to the stalls, where an animal control officer held his hand against the fallen horse’s spotted nose.

“Are you sure?” she asked eagerly.

“Yes. I can feel air coming from his nostrils.”

“Ma’am?” The sheriff looked at Penny. “Do you know this horse?”

For the second time, Penny dropped to her knees beside the animal.

“I do,” she said, gently touching the horse’s face. “His name is Joey.”

Kim Tschirret had a dream.  The Raleigh North Carolina mom of two and former marketing executive with Thomas the Tank Engine had recently read a remarkable book that not only touched her heart deeply but evoked a sense of personal purpose  – a passionate mission she later could only attribute to God’s artful plan.

“Hope Rising” was the book – and its author, Kim Meeder, chronicled heartwrenching stories of abused horses she and her husband, Troy, rescued and the hurting kids who began to find hope and healing themselves while helping care for the extraordinary horses.  The Oregon couple witnessed the natural connection between emotionally and physically wounded kids and horses – and embarked on an amazing journey by founding Crystal Peaks Youth Ranch, which today is home to dozens of horses and has served thousands of kids and families.

Kim Tschirret also loved horses – and unfortunately, she’d also experienced a tumultuous upbringing in a family marred by alcoholism.  She recalled the comfort and companionship her Chestnut Saddlebred “Country” granted her during the unpredictable teenage years  – and she knew Raleigh needed a ranch like Crystal Peaks.  In April of 2009, while hunting for Easter Eggs in a North Raleigh field with her daughter, Kim found the future Hope Reins property.  Owned by Bay Leaf Baptist Church, the 30-acre rolling hills at I-540 and Creedmoor Road seemed to provide everything a ranch would need – space, beauty and above all – a quiet refuge for hurting kids and horses.

Today, visitors who walk through the gates of Hope Reins are greeted by a Welcome Center, filled with smiling volunteers that support every aspect of the ranch.   The 16 horses peer over the stained fence as manure is scooped, pastures are raked, gardens are watered and most importantly, lives are transformed.  Sessions take place in the outdoor arena or custom-built “round pen,” which offers kids and horses a personal space to connect and perform groundwork.   It is a busy and bustling place at times – but also breathes tranquility when work ends and the firepit lights up for informal gatherings.

Hope Reins is a place where ordinary people – like Kim Tschirret – meet extraordinary challenges every day with God’s Grace and witness the triumph of hope and healing for kids and their families.