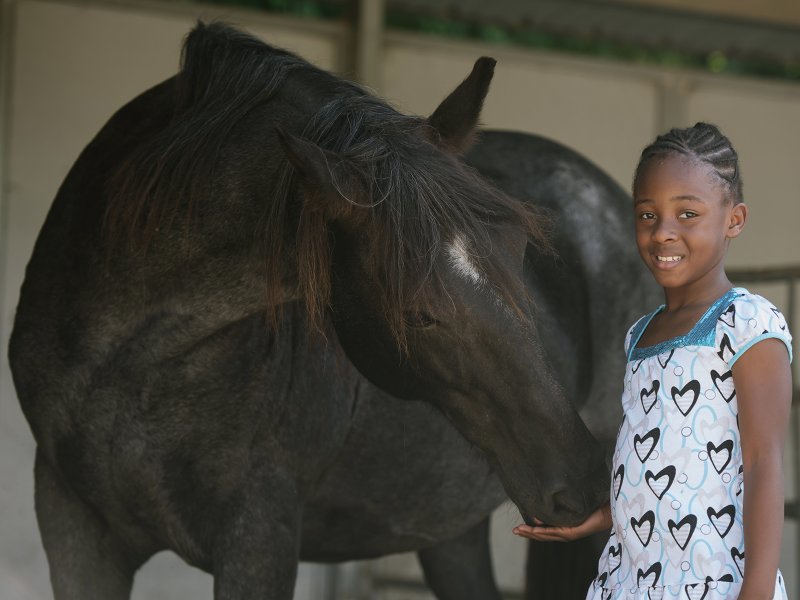 Cadence was born on the streets to a single, homeless mother and by the time she was three entered foster care due to extreme neglect, violence and malnutrition.

Fortunately, Holly and Brad fell in love with the tiny little girl they’d taken in as foster parents and adopted Cadence. “It was extremely hard for her to trust people at first,” says Holly. “She also had food hoarding tendencies because she was so deprived as a baby.”

Once in elementary school, anxiety and panic attacks emerged as Cadence struggled to develop relationships and healthy boundaries.  And, at home things were difficult as well. “Every day was a new day with her Dad because she remembered men only as abusive.”

Hope Reins, Holly thought, might be a pivotal support system for Cadence to make deeper connections because of the open, natural settings, horses and uplifting Christian foundation.

It was here she met Ruka, our beautiful black draft horse who shared a painful past of starvation and abuse as well. Caitlyn, Cadence’s session leader, explained how Ruka was still willing to trust people despite everything the mare had been through.

According to Holly, Cadence first said the words, ‘I love you,’ to Ruka – something she’d never, ever been able to say to her, Brad or anyone.

“Hope Reins has been a godsend.”