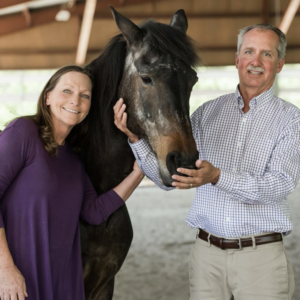 The success of Hope Reins as a ministry is rooted in the deep, significant relationships found here. Kids learn to trust by bonding with session leaders. Volunteers rely on team members to speak courage into their lives when things get tough. And, then there’s the extraordinary connection between Hope Reins’ trainers and our horses.

The special friendship forged between Anne Sanders and Cadence, a beautiful 38-year-old Morgan horse with big brown eyes, exemplifies the kind of love we all seek: one that is steeped in kindness, patience, and compassion. Cadence – or Cadie as she’s affectionately called – joined the herd seven years ago from the US Equine Rescue League severely underweight and suffering from a debilitating hoof condition called Laminitis. “You can compare the level of pain to gout in humans,” says Elizabeth Love Kennon, Hope Reins Equine Manager. “The condition carries with it a level of agony we can’t imagine.”

Yet, Cadie never folded. Even when she couldn’t move or lower her head, volunteers would cradle her feed bucket in their arms so she could eat. Cadence was the stoic alpha mare beloved by Hope Reins’ herd of ponies despite being cordoned off in a separate paddock because of food requirements. When Dru and Anne Sanders began volunteering together at the ranch, they noticed the ailing mare standing quietly, alone and invisible to most visitors. “She just looked so sad and depressed,” says Anne. “I started sitting with her for hours at a time – grooming, stroking, and just loving her.” As the hours turned into months, the married duo became fixtures at Hope Reins. Plunging winter temperatures, torrential downpours, or hot sweltering days never deterred the couple – especially Anne, a retired teacher who rode horses as a child and always longed for more. “I was drawn to Cadie because she needed me. She needed someone to love and care for her.”

Remarkably, as their relationship deepened so did Cadence’s resolve to heal. Anne likens the mare’s transformation to a butterfly relinquishing its cocoon. “We healed together.”

“When she’s around Anne, her entire demeanor soars,” says Kennon. On one particularly memorable day, Anne took Cadie off her lead line in the arena and dozens of bystanders marveled while watching the mare leap and bound through the air. “It was her Indian summer where she was amazingly free of pain,” says Kennon

For a horse that is 38 years old, like Cadie, the approximate equivalent human age would be 105 years. And, unlike most horses with chronic laminitis, she will leave this earth not because of her illness, but simply because of old age.

She’s taught me so much,” says Anne. “God used her to heal deep and long forgotten, broken places in me.

Cadence was lovingly laid to rest on June 4, 2018, with Anne and Dru by her side.