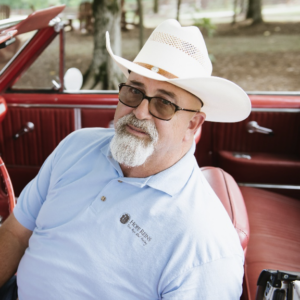 Jim Reason, affectionately called Mr. Jim, looks like he belongs at Hope Reins. Cowboy hat, check…western boots, yup… and he rides and owns horses. The only thing out of character might be the classic ’64 Chevy Chevelle convertible he drives.

“I’ve had horses all my adult life,” says Mr. Jim, who shares his passion with his wife, Karine, three kids and five grandchildren. “When I learned about Hope Reins’ mission at a fundraiser, it resonated with me.” After retiring from Xellia Pharmaceutical in 2015, Mr. Jim not only began volunteering with the kids and horses for one-on-one sessions, but also lent his business acumen to leadership in determining the viability of moving Hope Reins to its new and current location.  “When I walked on this property, it was so peaceful and serene. I loved the way it was so close to the city – yet also closed off to the rest of the world.”

Building up a fishing program at Hope Reins has been another area where Mr. Jim’s heart got hooked. “I saw this beautiful little pond, but we had no fishing equipment. So I went to Gander Mountain and asked them to donate some items,” he says. He also custom-built a round rod rack for the fishing poles. “There were three little boys who regularly fish – they helped me. It’s just all about relationships here. I love it.” Another highlight of the fishing program is the establishment of Hope Reins’ Fishing Tournament, which began a few years ago.

Hope Reins has become a family affair, too. Karine volunteers as a Listener for families, and who knows, maybe next year she’ll even bait some hooks for the fishing tournament. Says Mr. Jim, “I always come home from Hope Reins with much more from the kids than what I’ve given.”